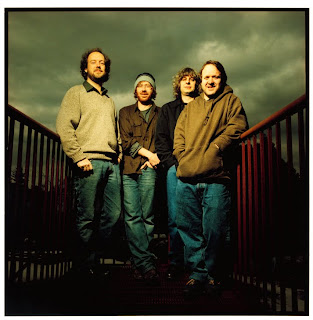 Music today sucks. I have too many old man gripes with music to limit it to just one long rambling post. Therefore, I will be doing a weekly feature on Bands That Suck Balls. This week’s Band that Sucks Balls is PHISH.

Phish is a fucking awful band. Unless of course you are a hippie, in which case you consider them some sort of hybrid super-group conceived as the lovechild of a sexual encounter between Led Zeppelin and The Beatles. If Phish is touring there is no distance considered too far for a hippie to travel to witness one of their shows. Also there is no Phish fan that will stop at seeing JUST ONE show on the tour. That would be ridiculous. If you’re a true Phish fan, you must witness at a minimum three shows on each tour. Since Phish fans are often unproductive members of society who don’t have cars or money for lodging, they often have to come up with creative ways to ensure they reach their three show minimum. Facebook is an ideal networking tool for this.

Unemployed Hippie 1 is Checking the Phish show tonight in Hampton! PSYYYYCHED. Looking to check out the scene in NC Sat. Holla at me if you’re hitting it up.

Unemployed Hippie 2 Bro WTF?? I’m tailgating for the show right now how did I not know you were in Hampton?? Hit me up when you get here we got room in the van and are def rolling to NC. Although we’re still figuring out where we’re gonna crash.

Pot Dealer living in his parents house ARTTTTY, TWEEEEZER. Y’all can def crash at my folks crib after the Sat show.

Bitch who has done too many drugs GAAAAAAAAAAAHHHHHHH WHAAAAT PHISSSSSSSSSHHHHH

Phish of course is fronted by hippie idol Trey Anastacio, better known in fan circles as “TREYYYYYYYYY.” Trey kind of looks like a ginger version of Eric Clapton that works in tech support. Aka nothing like a true rock frontman. TREY however is worshipped by hippies. He is the greatest singer/songwriter/guitar god in the history of mankind in their eyes. And who can blame them? He wrote THE MANGO SONG.

Yes these are actually Phish lyrics, and not just the crazed 4am scribblings of a meth addict. See Phish looked to older Jam Bands like The Allman Brothers Band and the Grateful Dead and thought “That’s a cool concept but these songs actually have lyrics that make sense, what a waste of time. Everyone in our crowd is on at least 3 psychedelic drugs currently anyways and can’t comprehend song lyrics. Let’s just sing nonsensical gibberish.”

Also, calling Phish a “Jam” band implies that at some point they really rock out. They don’t. The band members simply alternate playing long noodling solos for 30 minutes until Trey feels the need to switch to singing a new song about nonsensical gibberish. Never thought a 12 minute keyboard solo was necessary? You will not appreciate the genius of Phish.

PHISH: A Band that totally sucks balls.
Posted by Bagzzz at 12:49 AM